History Of Cities, Governments And Economies

If we do not learn from history, we are doomed to repeat it.  Throughout history cities, governments and organizations have collapsed as a result of the very things that created them, and made them great.

In early history,  people were “hunter gatherers“.  As a result, it was necessary for them to migrate with the migration of their food source.  By necessity, their dwellings were of light weight (like Tee pees), and their members were small, and usually family related so they could pack up and move easily.  An interesting observation:  classes of rich and poor were not common in hunter gatherer societies. Unlike in today’s societies and class rooms,  the Artisan Personality, and their high level of energy  was highly valued. 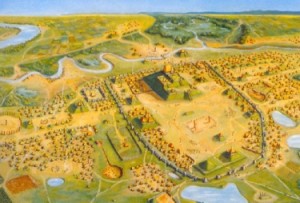 Before it was even possible for societies to settle in one place like cities, farming had to be developed.  Cahokia was such a city. It has been noted that women live longer in in settled societies than in the hunter gatherer societies.  It creates a time for prosperity and abundance for the masses like in early American history and the Egyptian’s New Kingdom period.  But it is not without the conditions that create it’s own demise.

As cities, governments and organizations grow, it becomes necessary for them to establish  laws for means of co-operation and harmony.  The Guardian personalities, like George Washington, become more important in this stage of development because they are by nature  gifted  organizers. It is during these times in history that all the different personality types are valued, and  seem to find a way to contribute to society.  We see men like Plato, and Socrates acknowledged and  appreciated. The organization/ society exists for the people.

As  cities and organizations continue to grow, work is divided.  Some people specialize in farming, others  provide goods and services, and still others become the leaders or law makers.

Note: You may have witnessed this even in small organizations such as Churches that start out dedicated to its  members, and increasingly move toward a situation in which the organization no longer exists for the  people, but the people   for the preservation of organization.

The Artisan Personality (the doer), who was once highly valued for his energy,  is now viewed as a annoyance as in our modern classrooms.

The law makers, and their friends inevitably develop an insatiable appetite for power and wealth which they glean from the labors of the commoner.  Historically as societies continue down this path, they  become so top heavy and one sided that it collapses in on itself..  it becomes tyrannical.

At this point, the people are left with a choice.  Some fall prey to those who promise to save them,  like did Hitler and the war lords of feudalism.  Others take the responsibility to recreate that which made  societies great in the first place, as did Constantinople which flourished one thousand years after the fall of Rome. You see folks, those who had become dependent on the labor of others  for their survival (welfare) suffered greatly after Rome fell.  But those who’s labor had been exploited, actually did much better after the fall of Rome.

The choice is yours not matter what happens.

Education has always been my passion, and I am blessed beyond measure to be allowed to serve in this way. We offer many educational products and school supplies, information, workshops, news letters, tutoring services, volunteer work, and free consultations. Roma can be reached at (904)317-5330 from 9:00 A.M. to 5:00 P.M. EST-U.S.
View all posts by Roma Cox →
This entry was posted in Lesson Plans and tagged economy, history, history of cities, histoy of governments. Bookmark the permalink.