The History Of Money And The Federal Reserve

A partial  audit of the Federal reserve revealed they have issued bailout money (at the expense of the American taxpayer) without knowledge or consent from the American people or Congress.  How is it even a remote possibility to believe we can balance the budget as long as this is allowed?

Our Founding Fathers referred to what we now call the Federal Reserve as the Central Bank.

In ancient times most lived off their land producing food while others produced  goods and services.  They had no need for money because they  bartered between each other (chickens, cows, shells, precious metals,  ext…things anyone had access to. No one held a monopoly on the money source…. “free market capitalism”)

But it made for an unreliable labor force because most people preferred to work for themselves, and had little need to work for others on a permanent basis.  The British and Dutch, in need of a labor force on their plantations located in various Colonies,  concocted a brilliant plan.  Folks, they decided to tax those “free roamers” for their land (we are now taxed on our labor…the income tax). But the catch was this:  they could not pay for it with bartering (things like cows, chickens and precious metals…things that anyone had access to if they were willing to work for it.) they must pay their taxes by money that only the British and Dutch central banks could issue (Much like the Federal Reserve issues today, it is something only a handful of elitists have control of, and power to issue.  )

The plan worked brilliantly.  Crony Capitalism was born.  People who would not be loyal to the plantation owners must now work for them to obtain this solely central bank  issued money just to keep their own land.    Andrew Jackson was so against the Central Banks that he referred to them as a “den of thieves” (but more on this below).  They openly spoke about their plan in the news papers:  http://paperspast.natlib.govt.nz/cgi-bin/paperspast?a=d&d=THD18840522.2.31 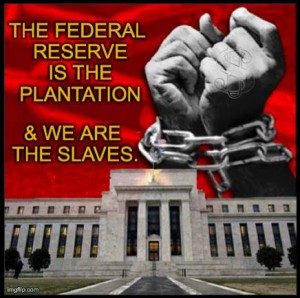 When I point out how The Federal Reserve holds a monopoly on our money supply, and that we work for the Federal Reserve and the IRS (taxation without representation), I am asked this question: “What do you want to do, Roma, trade clam shells and chickens?”  That is a good question, and here is one of the many answers.

(1) There is no conclusive evidence that JFKs Executive Order 11110 had anything to do with his Assignation….what he wrote is significant though.

Mr. Kennedy’s order gave the Treasury the power “to issue silver certificates against any silver bullion, silver, or standard silver dollars in the Treasury.” This meant that for every ounce of silver in the U.S. Treasury’s vault, the government could introduce new money into circulation. In all, Kennedy brought nearly $4.3 billion in U.S. notes into circulation. The ramifications of this bill are enormous.

You can read more here (a link to the text of the bill is included.) http://www.examiner.com/article/executive-order-11110-and-the-jfk-assassination-question

Some States are legally using nullification to bring back a value based currency.  One can read more about that at this link:  http://www.forbes.com/sites/greatspeculations/2011/07/28/a-gold-standard-that-makes-sense-in-utah/

Brief History Of The Federal Reserve:

“It is not our own citizens only who are to receive the bounty of our government. More than eight millions of the stock of this bank are held by foreigners… is there no danger to our liberty and independence in a bank that in its nature has so little to bind it to our country? … Controlling our currency, receiving our public moneys, and holding thousands of our citizens in dependence… would be more formidable and dangerous than a military power of the enemy.”

“You are a den of vipers and thieves. I intend to root you out, and by the grace of  the Eternal God, will root you out.”

“Whoever controls the volume of money in our country is absolute master of all industry and commerce…and when you realize that the entire system is very easily controlled, one way or another, by a few powerful men at the top, you will not have to be told how periods of inflation and depression originate.”

“Give me control of a nations money supply, and I care not who makes it’s laws”

The Federal Reserve is a staunch supporter of Keynesian Economics which basically believes that “debt is money”.

The more power the Federal Reserve, World Trade Organization and The International Monetary Fund  get the more they want, and they don’t mind putting it in writing:

Update: (1) The Federal Reserve has recently morphed, and is calling itself the world Bank.  To find out what its current goals are, you will want to read this article: “The United Nations Is Taxing The 1%: You.”

Education has always been my passion, and I am blessed beyond measure to be allowed to serve in this way. We offer many educational products and school supplies, information, workshops, news letters, tutoring services, volunteer work, and free consultations. Roma can be reached at (904)317-5330 from 9:00 A.M. to 5:00 P.M. EST-U.S.
View all posts by Roma Cox →
This entry was posted in American History, Lesson Plans and tagged cronly capatilism, federal reserve, history of money. Bookmark the permalink.

1 Response to The History Of Money And The Federal Reserve