Constitution: The U.S. Is Not A Democracy

Note: Over the years word meanings have changed.  In order to understand the Constitution, it is imperative that we understand the words used as the Founding Fathers understood them, rather than how we define them today. The following video explains.  (note: Because of the very informative comments below which were  made by Stephen, I have added the following video:)

While attending college in the 60’s I was taught that the U.S. was a “Democratic Republic”.  My Father would  rebuttal by saying, “no, we are a Republic.  Thinking my professors, and text books  knew more than my Dad, I dismissed his words.

But in more recent times, I notice students are being taught that the U.S. is a Democracy…leaving out Republic all together.  My curiosity began to get the best of me, and I discovered that in the 60’s (and even earlier)  the U.S. educational system began rewriting history: my father was right!

Defined: A government by the people; a government in which the power is lodged in the hands of the majority.  Athens, Greece had a Democracy.

We have done a disservice to the Egyptians now demonstrating in their Country for freedom by telling them we are a Democracy.  If they had been told the truth, they might now be putting the emphasis on the creation of a Constitution (which would limit the powers of their  government), rather than demonstrating for higher wages. Could this also be part of the story of what is happening now in the U.S.? 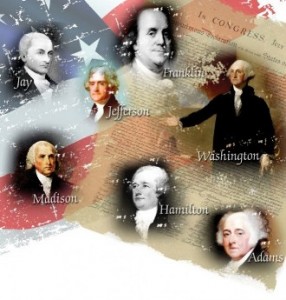 We do ourselves, our children and one another a disservice if we do not point out that the U.S. is not a democracy, and never has been. The book,  A Familiar Exposition of the Constitution of the United States: Containing a Brief Commentary on Every Clause, Explaining the True Nature, Reasons, and … Designed for the Use of School Libraries and

… Is an excellent resource for teaching, and learning about our true history, and the U.S. Constitution.

As you can see, in a Republic, Egyptians would not be in a position in which they find themselves protesting a government for higher wages.  Instead,  they would first protest  for a Constitutionally limited government…a government that would not have that power over them in the first place.

In a Republic, teachers would not be working for the government, but for a free enterprise run by the parents of the children they teach .

The Book JR mentions in his comment below is: Nullification: How to Resist Federal Tyranny in the 21st Century

Thanks goes to both of these gentlemen for improving this post.

One can read more about why definition changes have taken place at this link: The Constitution And The Welfare Clause

Education has always been my passion, and I am blessed beyond measure to be allowed to serve in this way. We offer many educational products and school supplies, information, workshops, news letters, tutoring services, volunteer work, and free consultations. Roma can be reached at (904)317-5330 from 9:00 A.M. to 5:00 P.M. EST-U.S.
View all posts by Roma Cox →
This entry was posted in Lesson Plans, The U.S. Constitution and tagged republic, u.s. constitution. Bookmark the permalink.

2 Responses to Constitution: The U.S. Is Not A Democracy