The History Of Money And The Economy

Most people have heard that Nero fiddled while Rome burned.  But few realize the creative way he handled the Roman coin to his own benefit, and that still effects us today.  You see, after Rome burned, Nero wanted to rebuild a tremendous complex in honor of himself, but he was short of funds to do so.

He concocted a plan: he collected coins from his subjects  as payment for taxes, and unbeknownst to them, he ordered the coins to be melted down and copper placed in the center making the Roman denarius only 94% silver.  Thus he ended up with more money than he had collected.  With this he was able to  build the lavish complex that his hart desired.  But the chain reaction he set in motion is the important history lesson that few know about.

Emperors that followed loved the idea of increasing their wealth in this manner, and they continued to add more copper. You see the incentive to increase their own wealth was greater than the incentive to improve the value of money to the citizenry.    By the time Rome fell, the Roman denarius had only 0.02% silver, and no one wanted to trade with this worthless excuse for money. Sound familiar?

After Rome many countries tried fiat money, but the fact is that every one of them collapsed, not only the fiat currency but also the economy that housed them. In every case it caused a transfer of wealth from the citizenry to those in power (legal theft).

Even the founders witnessed the effects of fiat currency. In 1690, Massachusetts began issuing colonial notes which  were originally redeemable in gold,  silver and other commodities..  Other colonies followed, and the money quickly became over issued making the money worth less and less (inflation). You see money must actually be backed by something it it is to retain its value. But meanwhile  leaders were well rewarded as was Nero.

The crash of the “continental” like every fiat currency before it  was significant, and something the Founders did not forget. They made it well known that they were totally opposed to the fiat money we are now forced to work for, and which only the Federal Reserve is allowed to control and issue (monopoly).

“If the American people ever allow private banks to control the issue of their money, first by inflation and then by deflation, the banks and corporations that will grow up around them (around the banks), will deprive the people of their property until their children will wake up homeless on the continent their fathers conquered.” …{This has long been attributed to Thomas Jefferson, but is actually a compilation of his quotes (click her for explanation)}

(Congress shall have the power) To coin Money, regulate the Value thereof, and of foreign Coin, and fix the Standard of Weights and Measures; (The Constitution, Article I Section 8)

But The Founding Fathers did not stop there.  George Washington wrote into law  the coinage act of 1792 which demanded the death penalty to anyone who devalued our currency as they now have (something most people know little about today).

The important lesson from all of this is that most of our leaders, like Nero,  have little incentive to return to real money. If it is to happen (short of a crash), the pressure will have to come from the we the people.

In the picture below, one can see how the U.S. dollar has decreased in value: 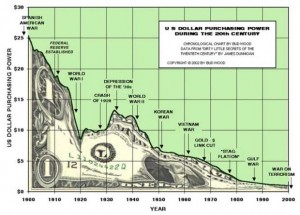 Note:  FDR needed more money than was available in his Treasury to finance the “New Deal”, so he did much the same thing as did Nero.

The Federal Reserve in co-operation with our politicians devised a plan to use our troops to secure the fiat dollar.

Money And The Federal Reserve

Education has always been my passion, and I am blessed beyond measure to be allowed to serve in this way. We offer many educational products and school supplies, information, workshops, news letters, tutoring services, volunteer work, and free consultations. Roma can be reached at (904)317-5330 from 9:00 A.M. to 5:00 P.M. EST-U.S.
View all posts by Roma Cox →
This entry was posted in Lesson Plans, The U.S. Constitution and tagged economy, federal reserve, fiat money. Bookmark the permalink.